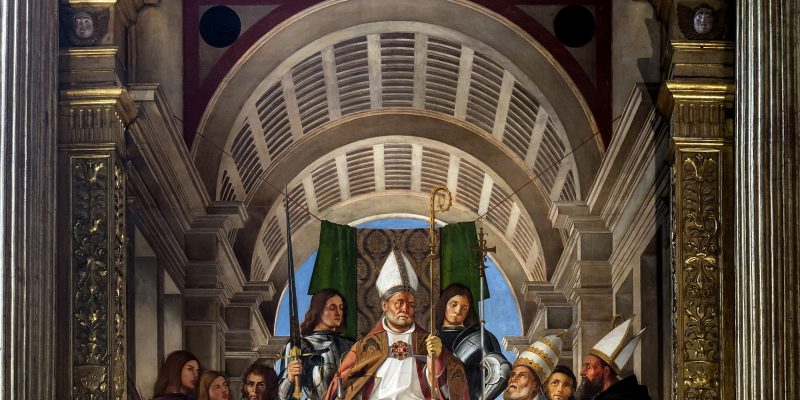 Towards the end of the 15th century, the Scuola commissioned Alvise Vivarini (1445-1503) to paint the magnificent altar-piece (5 x 2.50 metres). The artist died in 1503 and, thus, the work was completed by his pupil Marco Basaiti. The painting is inserted in a spectacular golden wood altar (1503) with precise carvings in the pillars, the frieze, and the internal and external surfaces of the arch. Two angels, holding torches, are arranged in the mixtilinear triangles between the curve of the arch and the channelled columns which bear the mighty and splendid entablature. The painting portrays an admirable arcade under which sits St. Ambrose, patron saint of Milan, holding a scourge in his right hand and in his left a pastoral staff. Behind him are two standard-bearers holding the unsheathed sword and the cross. Surrounding him on the left are St. Sebastian, St. Louis IX, St. John the Baptist and another Saint, on the right are St. Jerome, St. Augustine, St. Gregory the Great, and another Saint. On the steps to the throne, beneath the feet of St. Ambrose, two angels are playing the lute and the ‘mandola’. Up above, Christ crowns the Virgin. Despite the bitter expressions of certain characters, the altar-piece is truly impressive and beautiful, both in terms of the architecture and the variety and expression of the characters as well as for the natural look of the clothing and brightness of the colours.