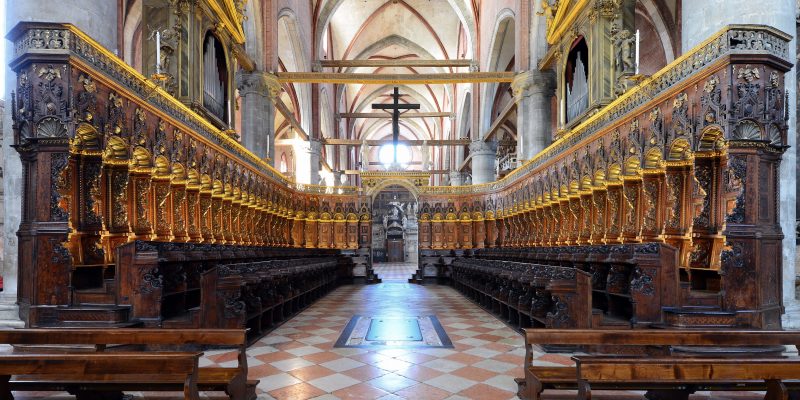 In the centre of the the church the observer finds himself before the beauty and magnificence of the choir. Unlike many other churches, the choir of the Frari remains in its original position. It was built in the same period as that of the one erected by the Canozi in the Basilica of St. Anthony in Padua (1462-1469). It was completed in 1468 by Francesco and Marco Cozzi of Vicenza, as specified in the Gothic inscription on the outside of the last stall towards the sacristy end (see photo 166 on pg. 107). The perfect distribution of the sections, the elegant dimensions of the stalls and the layout of the spires render this choir worthy of closer examination. The observer must have been astounded by the effect of the magnificent decorations when the guilding was new and gleamed gloriously in the foliaged friezes, in the arches and folds of the twin order shell-shaped niches with blue stripes. There are 124 stalls, 50 of which are in the upper row, 40 in the middle row and 34 in the lower. It is 4.50 metres tall, 13.70 metres wide and 16 metres long. The 50 upper stalls are decorated with double order of panels. The upper panels, with intricate frames, portray the figures of Saints carved in typical Gothic style tinged with German influence. The lower panels are inlaid with buildings, calli, campi and wells in perspective and foreshortened. The rest of the choir is bursting with an array of geometric shapes, each of which is carefully carved down to the last detail. Among the carvings there are some fine examples which look like portraits of persons who have posed for the artist. 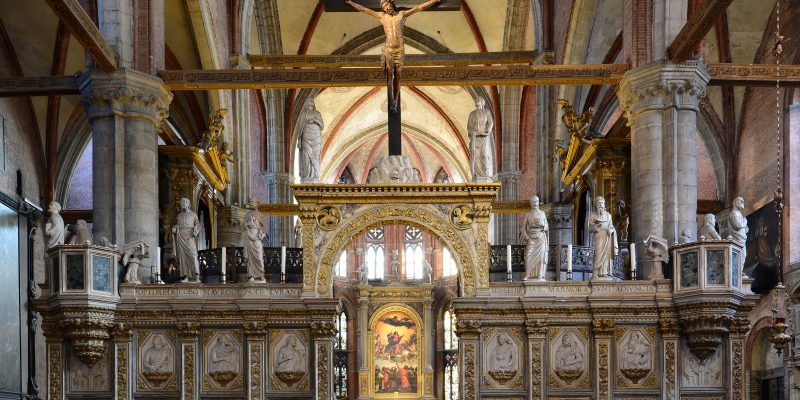 The front of the choir is enshrouded by an Istrian stone ‘septo’, added in 1475 when Giacomo Morosini was Procurator of the church. In the stone panels are the busts in relief, emerging from foliage, of the Patriarchs and Prophets of the Old Testament. From the left and up above the observer can view: Abraham, David, St. John the Baptist, Enoch, Jonah, Jacob, Elisha, Daniel, Jeremiah, Zachariah, Moses, Elijah, Isaiah. The last one on the right, containing the inscription: «Soli Deo honor et gloria», portrays Morosini. On the side facing the bell tower: Samuel and Habakkuk; on the opposite side: Isaac and Ezekiel. Beneath the ambos are the four Doctors of the Church: St. Gregory the Great and St. Jerome on the left, while on the right, St. Ambrose and St. Augustine. Above the crowning, with an arch in the middle and two ambos on either side, there are the statues of eight apostles and St. Anthony and St. Francis attributed to Vittore Gambello known as Camelio (1460 circa – 1537). The Virgin and St. John, by the same sculptor, are positioned on top of the grand central arch and flank the stark Crucifix attributed to a Venetian carver. Underneath the two ambos, there are bas-reliefs portraying the four Doctors of the Church, which, together with the busts of St. Bernardino and St. Ludovico of Anjou (sculpted on the sides of the two gracious pillars which support the arch) are the work of Pietro Lom bardo. The rest is the work of his workshop.