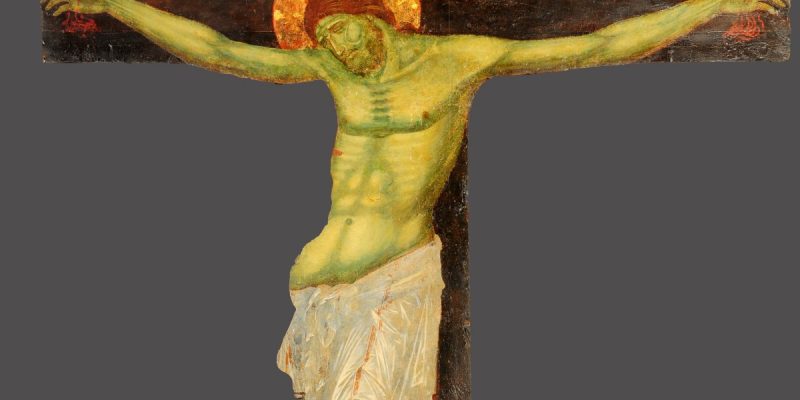 On the left of the High Altar there is a 13th century Crucifix commissioned in the second half of the 1200s to be hung in the Presbytery of the second church. During the 19th century the Christ was repainted according to the canons of the period and by 1825 it was to be found above the side door of the left transept. Subsequently, probably during emergency restoration and consolidation of the Basilica’s foundations, carried out between 1902 and 1915, the wooden Crucifix was transferred from above the door of the left transept to above the door of the chapel of St. Peter. Today the piece appears to be missing the trilobed ends of the arms of the cross. Missing too are the other painted figures, as is part of Christ’s right leg. During the restoration, a splendid crucifix of Christ was found beneath the 19th century painting. The crucifix was painted in tempera by an artist of the 1200s, probably from an Umbrian School according to some critics. It outlines the figure of a man in the arms of death after having suffered atrociously. A bloodless corpse is hung on the cross: its colour is off-green. Recent research carried out by Clara Santini (1997) attributes this “impressive painted Crucifix […] to the beginning of the work of the so-called «Maestro della Cappella Dotto» of the chapel of the same name in the church of the Eremitani in Padua”. 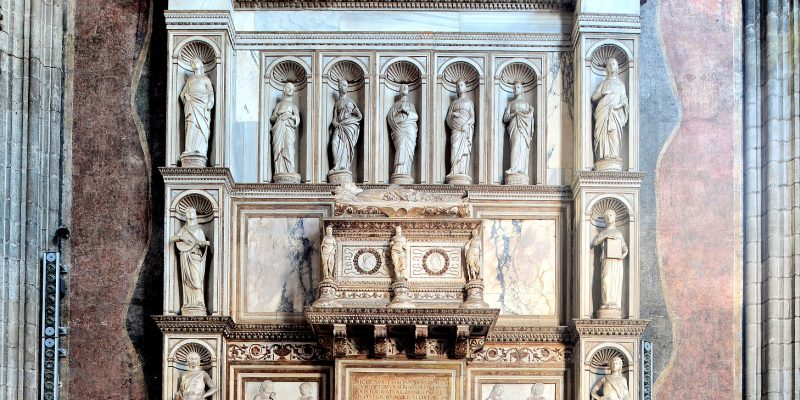 On the left wall of the Presbytery, surrounded by a fresco which resembles a red drape, there is the grand sepulchral monument of Doge Nicolò Tron. In terms of size, architectural structure, and number of statues it is the greatest Renaissance sculpture in Venice. This impressive work was mastered by Antonio Rizzo of Verona between 1476 and 1480. Along with the tall base and the end lunette, it is made up of four orders and is finished at the sides with slender columns with niches joined at the top by an elegant round arch. In the middle of the first order, there is the Doge wearing a golden mantle flanked by Faith on one side and Charity on the other. In the second order there is an epigraph with two children on either side who are holding a bunch of grapes and, at the ends, two well-sculpted warriors, holding shields with the Tron family insignia. In the third order there is the urn, adorned with medals and little statues, on which the Doge lies. On either side there is a statue, one singing and the other playing an instrument. In the fourth order, there are seven women who represent the Virtues. In the lunette, in the middle, there is Christ Resurrected, the Annunciation on either side and on the top of the arch with a lacunared intrados, the Eternal Father. 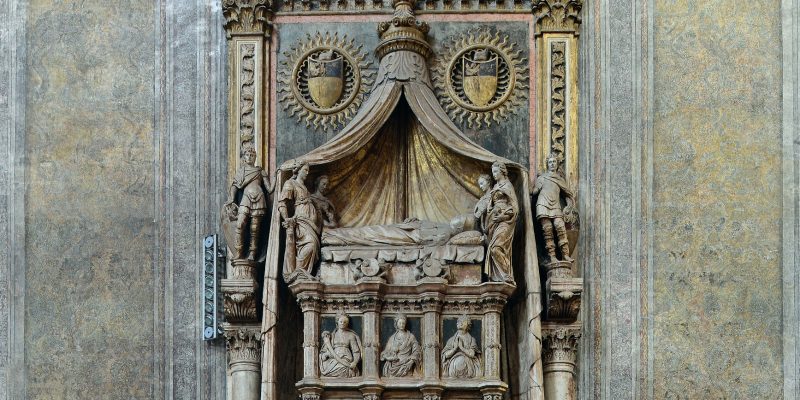 On the right wall of the Presbytery there is the monument to the Doge Francesco Foscari, one of the most important Doge of the Serenissima. His Dogeate of 34 years was mixed, with moments of glory as well as suffering. The monument was a transitional piece as it was sculpted in the mid-1400s and reveals the Florid Gothic style moderated by the Renaissance spirit. Four elegant corbels, adorned with foliage, support an urn on whose front are detailed the three theological Virtues, Faith, Hope, and Charity, with St. Anthony and St. Mark on either side. Above the urn, in the shadow of the marble canopy opened by two warriors, lies the Doge assisted by the four cardinal virtues, Fortitude, Justice, Prudence and Temperance. Above the canopy, there is Christ Resurrected who takes the Doge’s soul, in the form of a tender child, up to Heaven. On the pillars on either side, which complete the monument, is the Annunciation. Even this monument is surrounded by frescoed decorations which imitate the sumptuous tapestry of the period.