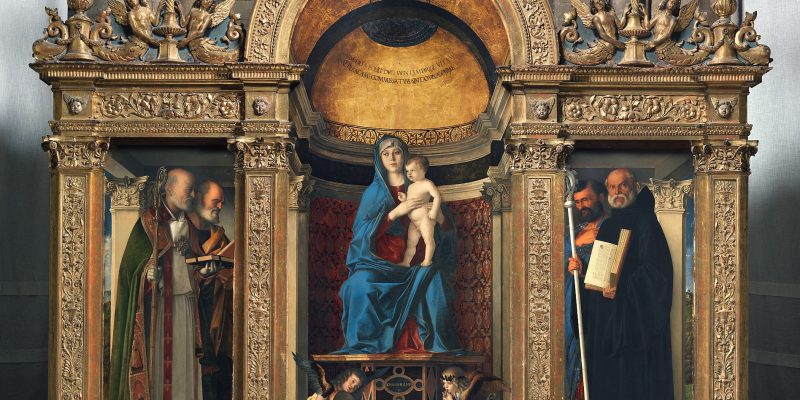 In the sacristy the observer is at once struck by the splendid polyptych (2.75 metres x 2.50 metres) commissioned to the artist, GiovanniBellini (1430 circa – 1516), by Pietro Pesaro’s three sons, Benedetto, Nicolò and Marco. The artist portrays the apse of a church with a golden barrel vault completed by a golden wood altarpiece which renders the frame the terminal point of the architecture where the holy world and profane world meet and coincide. The colours and expressions are fascinating. From the blue of the Madonna’s mantle to the patches of red, yellow and brown; from the yellows and browns of the clothing, of the wings, of the angels’ hair to the veins of the marble steps. In the central part of the triptych, The Virgin seated on a throne holds in her arms the Christ Child, who raises his hand in a sign of blessing. The perspective is perfect, so much so that the Virgin seems to come away from the painting. The two pilasters support the roof of the open area where the saints stand and, despite the limits imposed by the shape of the triptych, the effect of space is given by the thin strip of landscape on both sides. Madonna’s expression is delightfully tender. The two music playing angels at the foot of the Virgin are perfectly depicted: one of them is playing a flute while the other is strumming a lute. In the golden dome, the artist offers his prayer to the Madonna through the inscription: “Ianua certa poli, duc mentem, dirige vitam, quae peragam commissa tuae sint omnia curae” (O sure gateway of heaven, enlighten my mind, guide my life, and I entrust to you my every deed). The frame around the painting is stupendous and is in perfect harmony with the painting. It was probably designed by Bellini but was carved by Jacopo da Faenza (15th century).