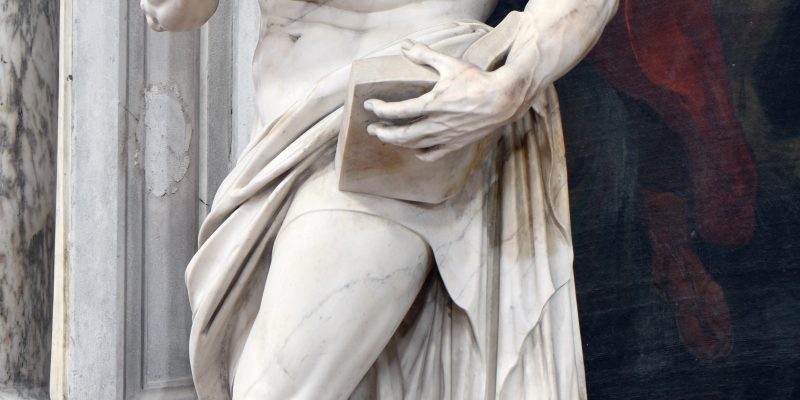 The statue of St. Jerome and the statues of The Baptist, St Peter, St. Andrew and St. Leonard in stucco and, on the upper pediment, the two supine sibyls ( which resemble the famous statues by Michelangelo in the sacristy of St. Lorenzo in Florence) represent the most important pieces of the artist between 1560 and 1575. Vittoria expresses his most inner self in these works. The St. Jerome (1565) was defined as “one of the most famous works of the 1500s” (Fogolari), imitating Michelangelo’s style. The expression, the realistic likeness to the human form, the strength and finesse demonstrate the introspective talent of the artist. On the plinth, which bears the statue, and on the sibyls on the pediment, is the inscription: “ALEXANDER VICTORIA FACIEBAT”. 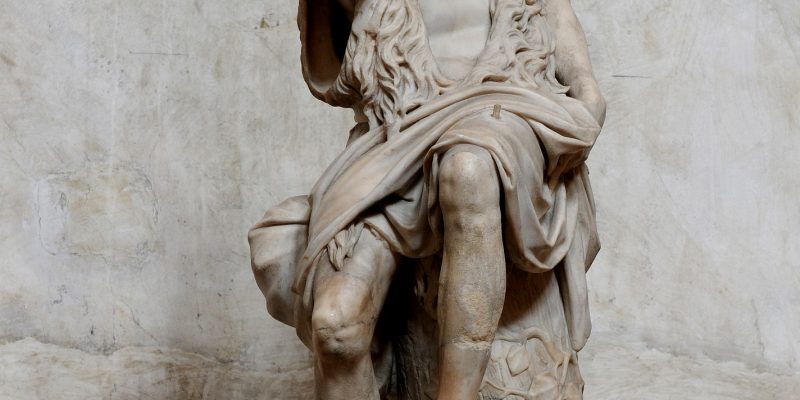 The holy water stoup was donated to the church by Daniele Giustiniani. The stoup was converted into a christening font by placing on top a marvellous marble statue of St. John the Baptist, one of the most inspired works of Jacopo Tatti known as Sansovino. Experts state that the work was commenced between 1534-1537 and was completed before 1540. On the marble is the inscription: “Iacobus Sansovinus Florentinus faciebat”. Mariacher states: “The refined taste for detail and technical perfection is strikingly clear to the naked eye, not only in the human body but also in the natural elements such as the tree trunk, the woolly skin covering the Saint and the details etched with extreme finesse”. 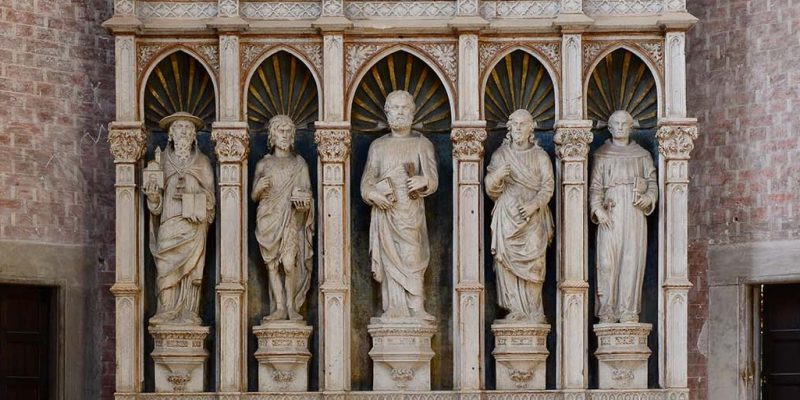 On the left side of the nave there is the Chapel of St. Peter, also known as Emiliani Chapel due to its being erected upon the commission of the Bishop of Vicenza, Pietro Emiliani, between 1432 – 1434. On the altar rests the marble altarpiece (3.85 metres x 3.13 metres) with the Virgin and nine saints, divided into two orders and sculptured by the school of the Dalle Masegne (1432). In the upper order, from left to right, there are: St. Lucy, St. Catherine of Alexandria, the Virgin and the Child, St. Mary Magdalene, St. Clare. In the lower order: St. Jerome, St. John the Baptist, St. Peter the Apostle, St. James the Great, St. Francis of Assisi. 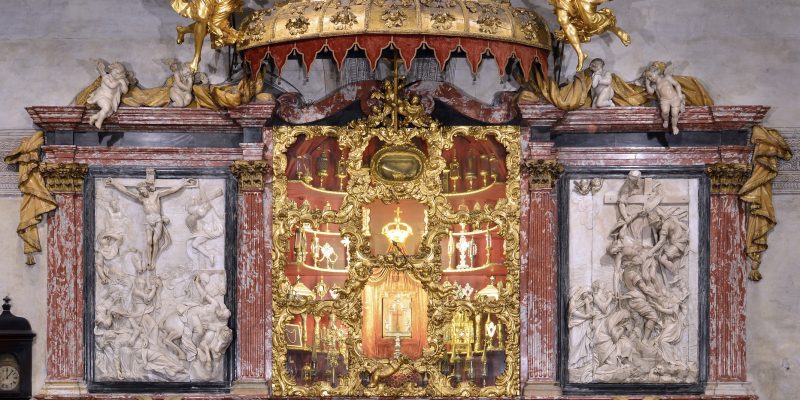 The present baroque altar was erected to adorn the marble tabernacle (now on the left of the iron door which opens into the Basilica) which contained the ampulla with the Precious Blood of Christ. In a crystal vase there is a small amount of balm which was mixed with a few drops of Christ’s blood collected by Mary Magdalene. The relic, which was highly worshipped in St. Christine’s Church in Constantinople, came into the possession of Melchiorre Trevisan, Fleet commander, in 1479. Upon returning from the Orient he donated it to the Frari church (19th March 1480). It was commissioned by F. Antonio Pittoni of the Frari Convent and, as can be read in the inscription on the black marble at the base of the altar, was completed in 1711. The three bas-reliefs are in Carrara marble, carved by the Venetian Francesco Penso alias Cabianca (circa 1665-1737). The dramatic and animated postures of the characters, which crowd the scene of the Crucifixion, are remarkable: Christ, at the centre of the scene is flanked by two thieves, one of whom is bent over having died on the cross. The scene of the horse, in the foreground, grabs the observer’s attention as the frightened horse’s frolics throw the Roman soldier off balance. The Madonna, who has fainted, is held up by one of the pious women, while another mourns Christ. In the scene of the Deposition the distraught group of people is wider at the base of the sculpture and pinnacles at the top with the man who is clambering up the ladder in order to lower the lifelessbody of Christ using a sheet. In the scene of the Entombment, whiletwo men are moving the marble slab which stands over the tomb, another couple of men lay Christ to rest on a sheet. The Mother mourns her dead Son. Six angels surround the scene, located at the centre and in the corners. At the top of the golden canopy an angel holds the sudarium with the outline of the face of Christ, while two angels, on either side, hold the pendant lamps. These wooden statues are the work of the great sculptor from Belluno, Andrea Brustolon (1662-1732).