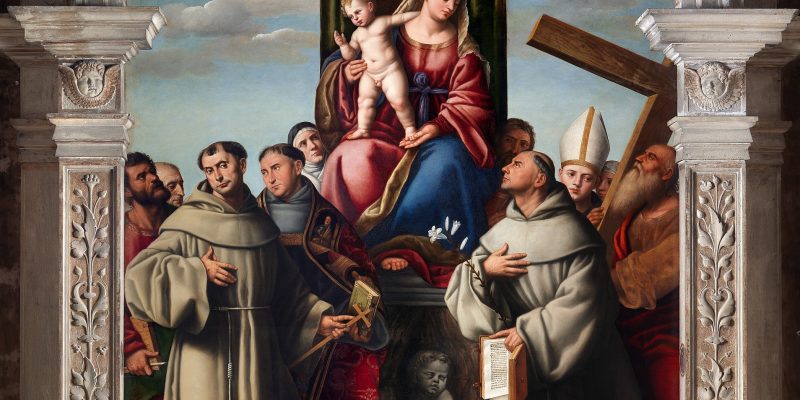 This masterpiece of Bernardino Licinio shows influence of Giorgione through his fellow-countryman Palma the Elder. On a tall throne sits the Virgin with the Child, while on the left there are St. Francis, St. Mark, St. Bonaventura, St. Clare, and the profile of F. Antonietto of Venice who commissioned the painting. On the right are St. Anthony, St. Andrew, St. Louis, St. John the Baptist and the half-hidden face of a woman, probably St. Elizabeth of Hungary, copatroness of the Secular Order of Franciscans, founded by St. Francis. Bode wrote that this is the best painting of Bernardino Licinio “not for the nobility of expression, but for the splendour of the colour and sense of motion”. 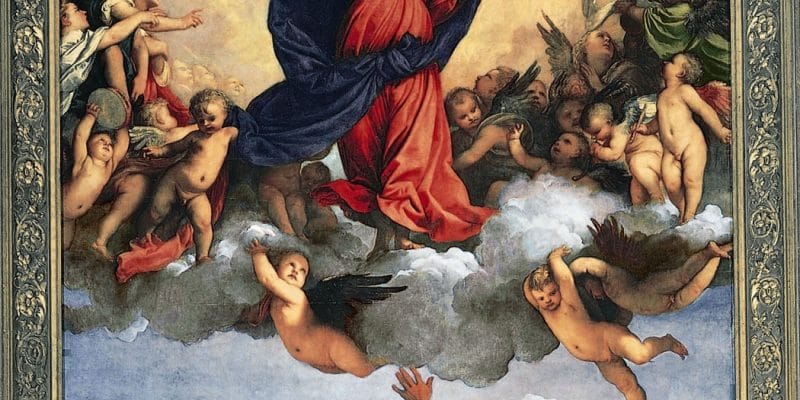 The painting is made of three levels: at the bottom there are the apostles, stunned and agitated for the incredible event. In the middle, the Madonna, extremely light, embedded in the light and surrounded y a crowd of angels. At the top, the Father who, in a pose of serene and majestic dignity, attracts the gaze of the Virgin.

The geometry of the painting, marked by the triangle of red colours, lead us to look up, towards the top; the light, on the contrary, consists of life, love, joy which fall from above. It emanates bright from the Father, runs through the Virgin and the angels in a golden aura; eventually, it becomes the blue of the sky. At the bottom, in the middle of the painting, we can find Titian’s signature: Ticianus (in Latin).

This is a groundwork work of the young artist; it is, in fact, his final … – so much so that it has become his most famous image.

Nel 1817 the altar-piece was transferred to the Academy of Fine Arts.

On 1917, during the First World War, the painting was transported to Cremona. After the battle of Caporetto, it was transferred to Pisa where it remained for 2 years. Finally on December 14, 1919, the famous altarpiece returned to Venice.

The painting was transferred again during the Second World War. First it was moved to Strà and then to Ca’ Rezzonico. On August 13, 1945 it was finally put back in its original place. From that day the Assumption has continued to shine from its frame, an icon of art and faith.