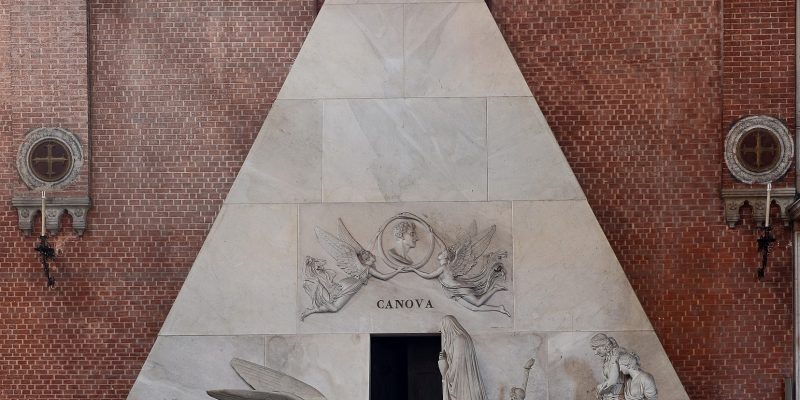 The monument in Carrara marble is one of the most typical Neo-classic artworks. It was erected by the disciples based on the design prepared by Canova in 1794 for Titian. The design was not used and was adapted for the monument dedicated to Maria Cristina of Austria which can be found in the church of the Agostiniani in Vienna. Canova died in Venice on October 13, 1822, and was taken to Possagno, his native village. Count Leopoldo Cicognara saw to it that the same model was used for this monument, which was erected in the beginning of May 1827. Three steps up is an admirable pyramid with an open door which leads to the presumed burial chamber. In front of the open door there are figures of women which portray the Weeping Sculpture, the Painting and the Architecture, followed by three genii with lit torches (art will never die!). On the left, at the base of the pyramid, the genius of Canova with his unlit torch and the desperate Lion (Venice). Above the door there are two angels who bear the effigy of the sculptor surrounded by a snake, symbol of immortality.